Tips and insights from experts in the Vlogging Camera field

Top vloggers in 2018 are raking in a lot of cash. A few are even multimillionaires. But with the market literally flooded with competitors trying to catch a break, the vast majority are destined for obscurity.

That is why if you are aiming for YouTube stardom yourself, you need to make sure that you are producing high-quality content. That starts with getting the best vlogging camera capable of producing such content.

Why a Quality Camera is Important for Vlogging

Why not just get started vlogging with any old camera? Here are a few reasons why a professional-level vlogging camera is essential:

You already know a lot of casual vloggers do get started with grainy, inferior cameras. If you are willing to invest some time and money to buy a powerful vlogging camera, not only will it be easier and more enjoyable for you to produce your video content, but you will already be standing head and shoulders above many of your competitors.

Features to Look for in a Top Shelf Vlogging Camera

First, let’s talk about the factors which influence the quality of a camera’s video output. These include the sensor size, the aperture size, the lens, and the type of processor used. Detailed articles could be written on each of these factors, but the sum of the parts is what you need to focus on. 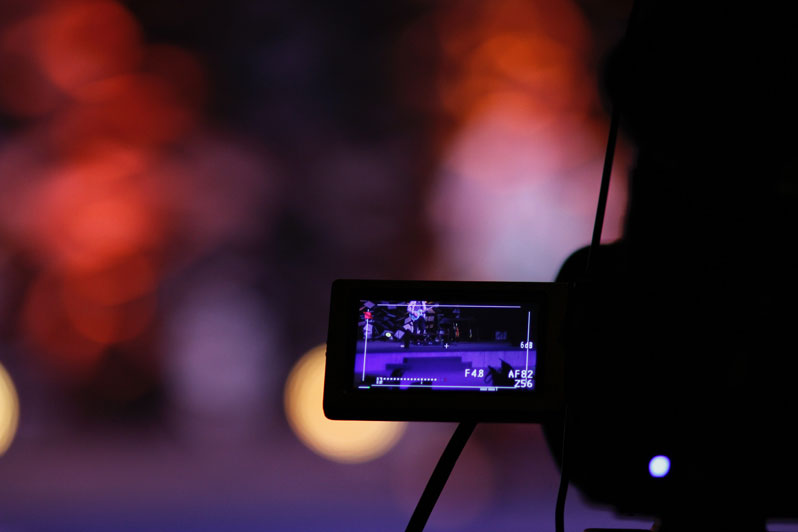 You will see both megapixels and resolution listed in the specifications for most video cameras, but it is the resolution which should concern you (megapixels are more relevant for static images).

At a minimum, you probably want to pick up a camera which can offer you at least 1080p resolution. For the highest quality currently on the market, however, you will want to shell out a bit more for a camera with 4K resolution.

Think carefully about what you will be vlogging about. If you are going to just be talking to your camera in the basement of your house, you probably do not need 4K. If on the other hand you are going to be vlogging video tutorials for DIY projects that involve fine, intricate work, paying for the extra resolution might be well worth it both to show off your projects and to communicate instructions as clearly as possible.

YouTube has increased the level of audio quality that videos are able to deliver, meaning that the best vlogging camera for YouTube needs to be able to capture audio at the same level clearity. To capture crisp audio, you are going to need one of two things—a powerful internal mic, or the option to connect a superior external mic. Which one is better? This too comes down to your vlogging plans.

For a lot of vloggers, being able to use an external microphone is essential. It ensures that anytime you want to upgrade the quality of your audio, you can. You just need to shop for a more sophisticated mic. This freedom may extend the useful lifetime of your camera, since you will not need to replace the entire unit when you want to upgrade the sound quality.

On the other hand, an external microphone is a pain to rely on if you will be taking your camera out with you in the field a lot. The fewer supplies you have to juggle, the easier your job will be. In cases like these, an excellent internal microphone becomes critical.

This is a feature which most vloggers will agree is among the most helpful you can buy. Also known as an “articulating screen,” a flip screen is an LCD monitor which you can manually reposition at an angle of your choice.

The main benefit for vloggers is that you can point the flip screen in the same direction as the camera lens. The screen will display the image which is being captured through the lens. That means that you can see what the lens is shooting without having to get up and move behind your camera. 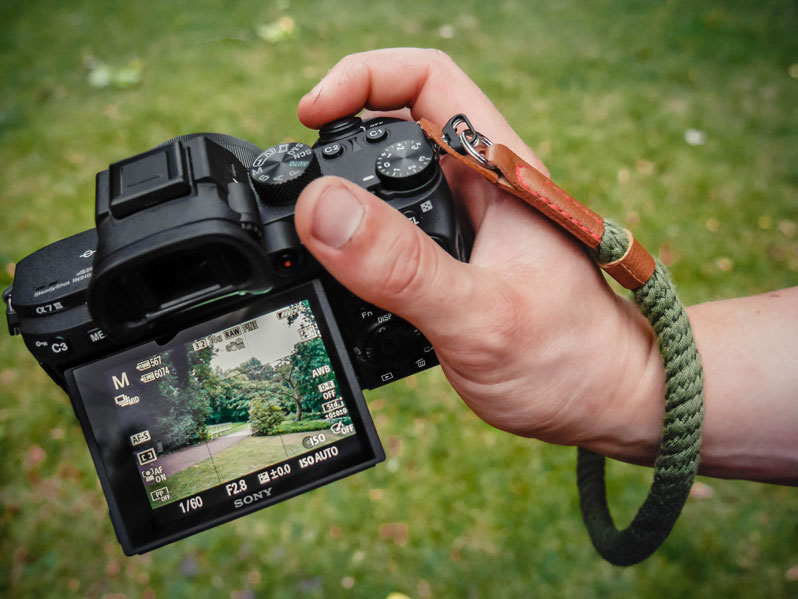 As you will be pointing the camera at yourself a lot, this is a huge help. It eliminates a lot of guesswork so that you can shoot your footage right the first time. You can also adjust your settings on the fly and view the results of those adjustments instantly on the flip screen.

The flip screen may help you with a variety of other tasks as well, like capturing footage around corners. Or perhaps you want to place the camera low to the ground, or hold it up over your head. In both of these scenarios, owing the best vlogging camera with a flip screen makes it possible to see exactly what you are shooting. Otherwise, you might have to try repeatedly to get the right angle.

This feature is also a must for any professional vlogging camera. With auto-focus, each time you reposition the camera, it automatically focuses on the object it believes you are trying to shoot. 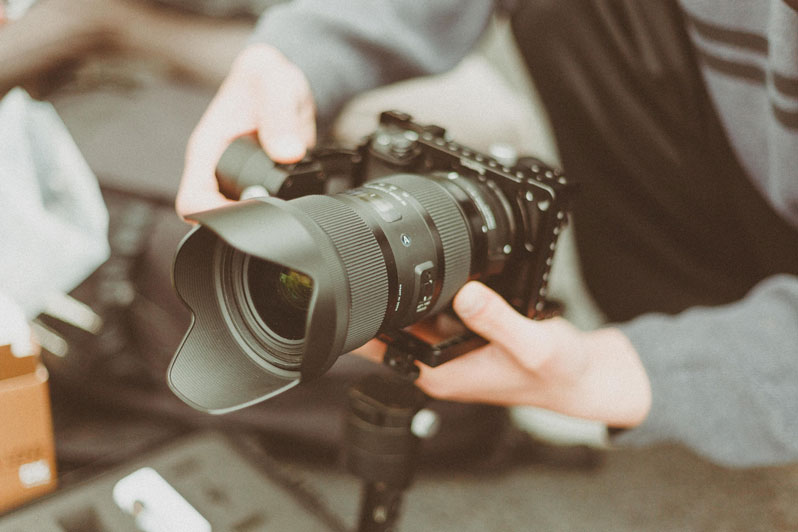 For a feature like this to be useful, it must be both intelligent and responsive. It must be able to correctly determine the correct depth of focus on its own as often as possible to reduce the need for manual adjustments. It also needs to be able to switch focus quickly so as to produce seamless video without interruptions.

Abbreviated “OSI,” Optical Image Stabilization is another must-have feature if you are going to be moving the camera around a lot while you are shooting. As its name implies, this feature stabilizes the image while it is being captured, compensating for movement. 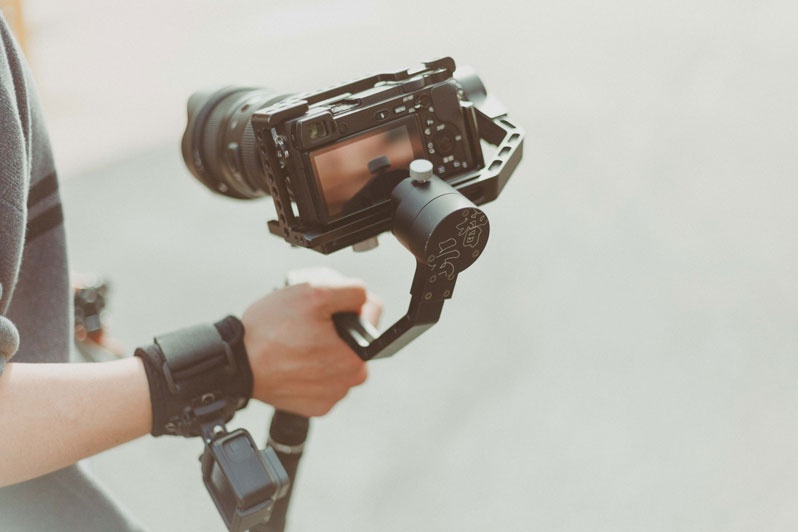 This allows you to capture action from a first-person perspective without significant blur. In other words, you can walk down the street with your camera and get a clean capture. You can even vlog while surfing, skateboarding, skiing, and so forth.

Being able to control shutters speed, focus, zoom, aperture, and other settings is more applicable to snapping still photos than recording video. Still, there may be times when you want to do just that. So if possible, look for a camera which will let you adjust those settings as you see fit.

How much a camera weighs is of little significance if it will just be sitting on a tripod in your house all the time. But if you will be carrying it around while you are shooting footage—or even just transporting it frequently between locations to set up on the ground—the weight may end up mattering to you more than you expect.

Hours of hauling a heavy video camera around can be surprisingly fatiguing. It can wear on your stamina, making a job which should be enjoyable exhausting and frustrating. It may make you want to pack up and call it quits early each day.

While you do not want to sacrifice critical features to keep your camera lightweight, given two cameras which are more or less equal in all other respects, you should generally pick the less cumbersome of the pair. Doing so will allow you to work longer and harder without tiring yourself out.

This is another feature which is of little importance if you will mainly be shooting indoors in controlled environments. But if you will be heading outside, it is wise to get a video camera which includes at least a minimal degree of resistance to water and dust. 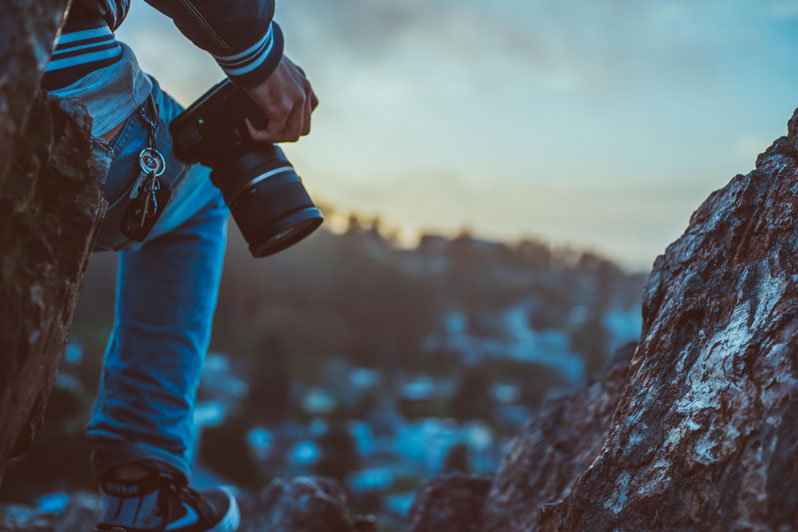 Those who will be heading to harsh environments to vlog will need to shop for a camera which features actual waterproofing, rather than simply water resistance. Say for example that you are a surfer, and you want to capture the action on the waves. Your camera will need to be able to survive full submersion, not just splashes of water. Check to see what waterproofing rating the camera has earned to determine if it is adequately protected for your needs.

These features too are most important in the field rather than at home. Together, they determine how long you will be able to work before you need to replace the batteries or upload your footage to your computer.

You can of course bring replacement batteries as well as external storage with you (assuming you purchase a camera which includes support for external memory cards). But that means more supplies to lug around. A camera which offers ample onboard storage and battery life can spare you from needing to deal with this. If you are shooting in remote locations, it may actually be vital, as a trip to the store to pick up extra supplies may not be an option.

Okay, so this feature isn’t really essential, but it is nice to have if your budget allows you to shop for some fun extras. Time-lapse footage can make a great bridge between segments, helping to introduce more of a “slice of life” quality to videos. With a built-in time-lapse mode, generating this kind of video content is effortless.

Whether you need touch-screen controls or not is largely a matter of personal preference. Some people love touch-screen technology, and find it more intuitive and accessible than old-fashioned buttons. Others however prefer a more traditional interface. Go with whatever you find easiest and most comfortable to use. You want to be focused on the video you are recording, not struggling to work your camera.

Of all of the features we mention in this buying guide, this would be the lowest priority. If you are on a budget and are looking for a cheap vlogging camera, sacrifice bells and whistles like touch screen controls before you sacrifice audio of video quality.

Finally, you might think that it isn’t a big deal to have to plug in a cable to transfer the footage you capture from your camera to your computer. If you will not be vlogging a whole lot, you might be right.

But for those who are going to be vlogging regularly, having to constantly plug and unplug the camera can get to be a real hassle. A video camera which features support for wi-fi and NFC (Near Field Connectivity) allows you to transfer your videos right to your device with the push of a button. This makes it a breeze to free up space in your camera to shoot more video, and to share the footage you have captured online. Ultimately, this can be a major time-saver.

To Choose the Best Vlogging Camera, First Assess Your Needs

You should feel quite comfortable now researching specifications and features for various vlogging cameras on the market. While some features such as a flip-screen and auto-focus are important for all vlogging cameras, others such as weather resistance and 4K resolution may only be vital to vloggers working in certain settings or covering specific topics.

So start by assessing your needs. Think about the environments in which you will work and the situations you are likely to encounter while you are shooting your vlogs. Then make a list of the features which are essential as well as those which would simply be nice to have. You will then be ready to shop for a camera which will help you create spectacular videos to post online!