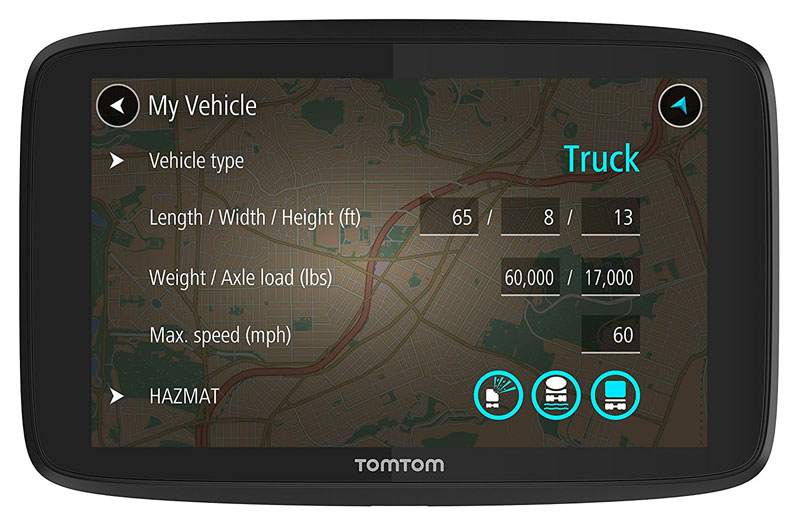 Check out a user submitted review of the TomTom 620 for Tow Trucks.

As a tow truck driver, I am always eager to put up latest gadget in my truck which could make the driving experience even more fun and interesting. One evening earlier this year, a co-worker suggested to look at the TomTom Trucker 620 6-Inch GPS for my cab. After reading a few truck GPS reviews, I decided to take a chance and listen to the advice of my friend. This device is mainly made for commercial trucks and comes with Wi-Fi Connectivity, Smartphone Services, and Free Lifetime Traffic and Maps of North America; and I thought it would be a perfect addition to my cab while towing vehicles. I know a few other co-workers who own TomTom Trucker 600s, and are thrilled with them. So I was excited to get my hands on the new 620.

I’ll start by saying this device has been a constant companion for me. There are some roads where I couldn’t afford a single mistake or miscalculation; GPS devices are required in those places. I remember a particular instance which I went through a few weeks after receiving the TomTom, where this device proved to be a huge help to me. Once when I was trailing through the Nevada state line on my way to a vehicle stuck in a snow bank on the side of the road, and device notified me about an oncoming snow squall and suggested I use an alternate highway. It turned out that a co-worker of mine had trailed through the highway which was affected by the snow and got stuck on a steep incline for a couple of hours. I was really thankful to the device as the consignment was not only important to be relieved without any delay, but also keep me and my truck safe.

The truck routing of this device helps me to automatically find the ideal route for my truck based on the consignment I’m carrying. From size and weight of my load and so on. I especially love that the device helps in avoiding small, narrow, bumpy roads for trucks and large vehicles. In terms of map quality and providing update to the maps in order to make them more relevant, TomTom works like a charm. Like some of the best truck GPS units, it updates its maps in regular intervals so I’m never surprised of new or closed roads. I would appreciate this feature more if the updates could be rolled out more frequently than they come now, but I’ve found it to work well enough for my tow truck use. Its connectivity with Bluetooth provides additional advantages too.

Regarding its compact-ability and portability, I would give it 4 out of 5 stars as it’s the same as other GPS devices available on the market. However, being able to use it in my car was a major plus point of this device. The GPS device could store information about 4 vehicles in its memory which is a handy feature for any tow truck show. I didn’t have to put a lot of efforts while setting up this device in my car after removing it from my truck cab. Just a tap of button adopted the settings for the car and helped plan routes accordingly. Additionally, it is easy to move the device from one spot to another as it comes with a snap mount system. The mounting system could easily handle some jerks felt on bad roads, and firm mounting ensures that the device never falls. You could even hardwire the device, which most of my fellow tow truck drivers have done, however I refrained from doing so as it required a few cables. Moreover, I had to frequently take this out because I loved to put in my car as well as my truck.

Driving around Colorado and in other mountainous areas had made it mandatory for truckers to have GPS devices with clear screens and optimal brightness; otherwise they can be difficult to see as the sun reflects off the snow. TomTom never failed to impress me in these situations as it had great brightness which made it easy for me to view the screen even when there was glaring and direct sunlight inside the cab of the truck.

As a tow truck driver, I have to drive continuously for hours at a stretch. The powerful battery makes sure that I don’t have to stop to charge the device as it could last at least two hours. In a few instances it lasted nearly three hours, however other times it lasted just less than two hours due to the Bluetooth and high brightness settings drawing at the power. The plus point is that the battery could be charged with micro USB cable so I connected it with Power Bank or the truck’s phone charger and I was good to go.

For long rides this device is helpful as it would suggest certain refuelling and check-ins on the way, making the driving experience more enjoyable and a stress-free activity for me.

Finally, being a tech-savvy trucker, I really enjoy the storage the device is capable of providing. 16 GB of internal memory expandable to 128 GB surely enables you to save every possible map which could be traversed with your tow truck.

If I could add a feature which isn’t available, it would be built in Wi-Fi connection for the device. I also found it a little bit inconvenient to use the device through the app. I would suggest TomTom incorporate these features in the later updates of the device to really gain an edge on their competitors.Ultimately, I think this is one of the best GPS for tow truck drivers available today, and I would suggest all tow trucker get this unit. Don’t focus too much on the price. Consider it a long-term investment that will bring peace of mind and stress-free driving, and you certainly will appreciate that once you have it. I already suggested this product to three of my co-workers. It’s an excellent choice for all commercial truck drivers out there as this device would certainly enhance productivity and save time.